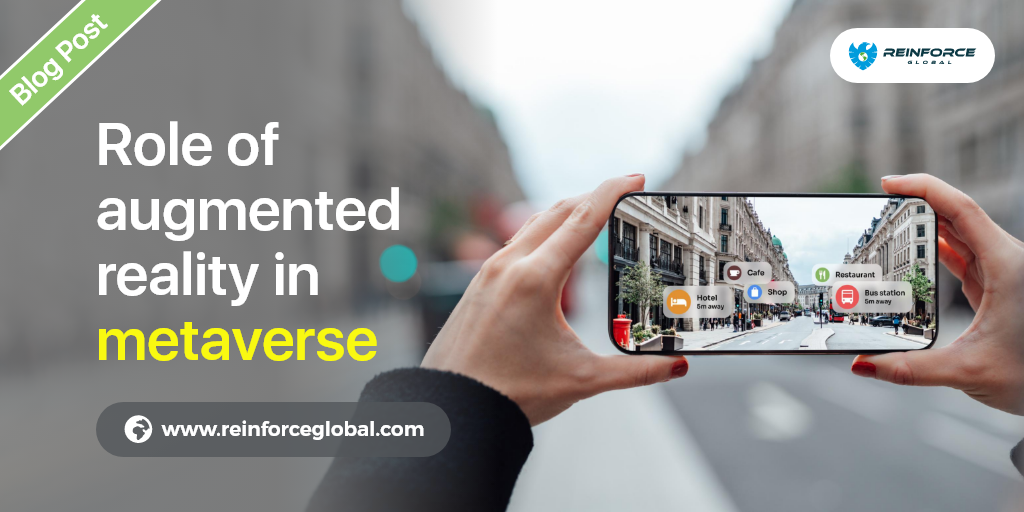 Role of Augmented Reality in Metaverse

The Metaverse is one of the world’s biggest innovations in the making. In fact, according to its creator, Mark Zuckerberg, it is supposed to be an invention that rivals the entire internet itself. As of today, the metaverse combines several technologies such as Virtual Reality (VR), Augmented Reality (AR), blockchain, social media, and everything that will revolutionize Web 3.0. Let’s explore this new world in detail and see how your business can utilize AR to take itself to the next level.

What is the Metaverse?

Mark Zuckerberg’s brainchild, the Metaverse is a virtual, parallel world that is meant to revolutionize the way we interact with technology and each other. It combines VR, AR, and the real world in ways never seen before.

You may have already seen existing virtual worlds that exist parallel to ours such as in popular video games like Roblox, VR Chat, and Minecraft. The Metaverse is here to change the world and impact areas such as:

What is Virtual Reality?

Virtual Reality, or VR is the technology that you may already have heard about or even used. It can generate a realistic 3D environment inside a computer that can be seen in 3D via a headset. It can make you feel you’re inside the virtual environment using three-dimensional tracking of your hands and head movements.

This world can be used to represent anything from a virtual shopping center to a realistic video game that makes you feel that you’re physically in it. Currently, the commercial applications of VR are beginning to change the world, and innovators are excited to see the direction it takes.

What is Augmented Reality?

As of now, AR has been used in various industrial applications such as design and fabrication. Commercially, it can be used for features such as GPS, as seen with the age-old Google Glass.

Unlike VR, AR does not require users to wear bulky headsets as it can work with all kinds of smart glasses. The prime pop culture example of the potential of AR is in the Marvel film Spiderman: Far From Home, where the EDITH glasses are used to interact with technology while being present in the real world.

Mixed Reality: The Best of Both Worlds

Unlike VR, which immerses the users in a totally virtual environment, or AR, which simply overlaps digital content on top of the physical environment without considering its unique and changing composition, MR devices constantly gather new information happening in the surroundings.

However, it is important to note that MR is still in development and is not fully implemented on any device. In contrast, VR has already been conquered by Meta’s Quest 2 line of VR headsets, while Microsoft’s Hololens currently dominates the AR industry.

Why Should Your Company Be in the Metaverse?

Besides mixing realities, this universe will have its own value chain where people and businesses can buy and sell virtual goods and services, such as NFTs (Non-Fungible Tokens).

To make the best out of this new technology, you’ll need to be in it in some way to be able to participate in what’s likely to be a substantial economy shaping the future of technology and digital interactions and will definitely change customer behavior.

Since the Metaverse is a project in the making, it is hard to predict the direction it will take years from now. However, as of now, AR and VR both will serve as the key platforms that will allow businesses to make their debut in this parallel world. To know more Contact Us- Reinforce Global